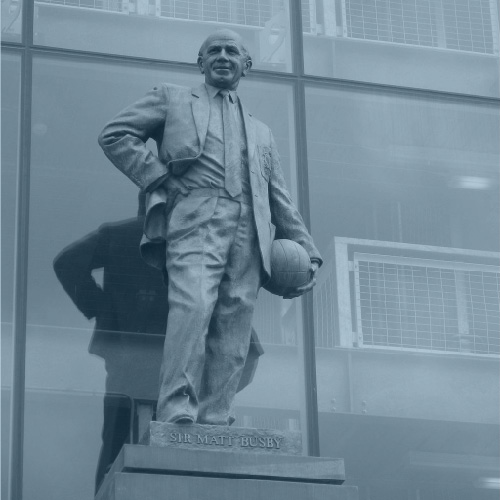 Posted at 05:46h in Articles by JurgenO 0 Comments
0 Likes
Share

As the 35-year old Alexander Matthew Busby looked out over the bombed-out remains of Old Trafford on 19 February 1945 he saw hope and opportunity. He believed he could turn a struggling team, with a £15,000 overdraft, into one that played attractive, winning football.

He knew it would require time, hard work, and lots of support. In his negotiations with Club officials he insisted on a five year contract and unprecedented control over team selection, tactics and even the buying and selling of players. Having failed to procure him as a player in 1930, and knowing that he had already rejected the Assistant Manager position at Liverpool because of a difference in opinion about how the game should be played and governed, the Board agreed to Busby’s terms and offered him the position of Manager of Manchester United FC.

After receiving his demobilisation papers in October 1945, Busby took on the position he would hold for 25 years, during which he built three championship-winning sides, revolutionised the sport in England, and dragged the nation on to the world footballing stage. He steered the Club through a devastating tragedy that nearly cost him his life, and his vision, determination and courage laid a foundation for what was to become one of the biggest sporting brands across the globe. Such is the legacy of Sir Matt Busby (1909-1994).

“A footballer has come into this house today”

Busby was born in a two-bedroom pitmans cottage in Scotland on 26 May 1909. The family doctor looked at the tiny infant predicted the birth of a footballer. And from the outset that was his passion. After only a few matches with a local amateur side, his talent was spotted, and on 11 February 1928 he was offered a £5/week year contract with Second Division side Manchester City.

He had to wait 18 months to make his first team debut, and then played only a dozen more matches in the next year. But his perseverance was rewarded in the 1930-31 season when his then manager switched him to a more defensive role. He thrived in his new position, earning a reputation as an intelligent player and fine passer of the ball. In later years Busby would demonstrate the same insight in identifying the hidden potential of players, and improving their performance by better utilising their strengths.

After more than 220 matches and an FA Cup winners’ medal for City, Busby was sold to Liverpool for £8,000 in 1936, where his consistent performances earned him the Club captaincy, which he held with great distinction.

Busby’s official playing career ended with the outbreak of war in September 1939. He joined the army and became a coach in the Army Physical Training Corps, where he refined his ideas of how the game should be both played and governed.

With the Club in debt and the nation facing the mammoth rebuilding efforts after the devastation of the Second World War, Busby opted to build rather than buy. He analysed the skills of his squad and then made a number of astute positional changes, breathing new life into tired legs. His only major signing was Jimmy Murphy, a former Welsh player whose oratorical skills so impressed Busby, that he offered him the position of Assistant Manager, a post he was to hold until 1971.

Together they created United’s first great post-war team built around the defensive capabilities of Johnny Carey, John Aston and Allenby Chilton and the attacking skills of Charlie Mitten, Jack Rowley and Stan Pearson. With Busby’s tactical acumen and shrewd positional changes, and Murphy’s oratorical capabilities, United’s players were re-invigorated, and the team finished as League runners-up four times in 1947-49 and 1951, and won the FA Cup in 1948, before finally landing the league title in 1952.

While Busby’s team of ageing veterans was challenging for honours in those post-War years, the manager had his eyes firmly on the future and started actively expanding and reorganising the Club’s scouting system and youth development program.

The Rise and Destruction of the Busby Babes

The program bore fruit in the early 1950s, with players like Jeff Whitefoot, Jackie Blanchflower and Roger Byrne coming through the youth ranks into the first team. By 1953 a further six former youth players, including the likes of Bill Foulkes and England’s big hope, Duncan Edwards, became regular first team players. Edwards was only 16 when he made his first team debut, and by 17 he was playing for England.

In the next four years Busby would only make two major signings, bringing the rest of the squad through his youth program. His philosophy was simple: If they are good enough, they are old enough. If you don’t put them in, you can’t know what you’ve got.

What he had was a team of youthful energy and immense talent, moulded into his idea of how football should be played: score more goals than your opponents can. Affectionately nicknamed the Busby Babes, the team had an average age of only 22 as they swept to league titles in 1956 and 1957, and started challenging for international honours.

Again Busby was in the forefront. The English Football Association had denied 1955 champions Chelsea from competing in the inaugural European Cup, which pitted Europe’s national champions against each other in a knockout tournament. Busby argued vehemently against footballing isolationism, and eventually persuaded FA officials to allow United’s participation in 1957. The young side performed well and reached the semi-final, losing against the star-studded defending champions, Real Madrid.

In the next season United were again in the hunt for League, FA Cup and European Cup honours when tragedy struck on 6 February 1958. They reached the European Cup semi-final by defeating Red Star Belgrade 5-4 on aggregate. Returning home via Munich, their chartered BEA Elizabethan Air Ambassador overshot the Munich airport runway while attempting to take off in blizzard conditions, crashing into a house and killing 21 people instantly, including seven players and three Club officials. Edwards and the pilot died 15 days later, bringing the death toll to 23. Two other players recovered, but were never able to play again.

Busby himself was among the critically injured, twice receiving the last rites. For weeks he hung in the balance and doctors forbade anyone from telling him the extent of the tragedy, fearing the shock would be too much for him to bear. When Busby did learn the truth, he took it exceptionally hard, blaming himself for persuading the FA to allow United’s participation in the tournament and believing he should have aborted the plane’s third and fatal take-off attempt. He spent months in hospital and then recuperating in Switzerland, and needed a lot of encouragement to return to football the following season.

In the meantime it was up to Murphy to field a makeshift United side in their next match, an emotional win only 13 days after the crash and featuring many of the youth team. It was also Murphy who led the Club through those dark days, reaching the FA Cup Final, but losing the league title to Wolves. Murphy’s role in United’s survival cannot be underestimated, but he was at the forefront of calls for Busby to return.

Busby returned in the 1958-59 season and started the long rebuilding process. Two Munich survivors, the young Bobby Charlton and goalkeeper Harry Gregg, formed the nucleus of a new side, with another survivor (Bill Foulkes) elevated to the captaincy. He made several strategic acquisitions, including Dennis Law and Pat Crerand, but did not abandon his youth policy. Again, he sent out scouts to identify talent and nurture them through the Youth ranks.

The Club struggled in all competitions, not winning another trophy (the FA Cup) until 1963. But the Board and fans kept faith in Busby’s rebuilding efforts. In September 1963 Busby brought another 17-year old youth team graduate called George Best into the senior team and steered the Club to a second place. Another season, and the next generation of youth graduates joined the veteran Charlton and Foulkes in landing United their first post-Munich league title.

But Busby’s work was not yet done. In 1968 his rebuilt side overcame Real Madrid in the European Cup semi-final and went on to defeat Benfica 4-1 in an emotionally laden Final. Ten years after the tragedy of Munich, Busby achieved his crowning glory, and United became the first English team to win the prestigious trophy.

Busby retired a year later, briefly returned for part of the 1969-70 season, and then went on to become a director and then Club President and life member. A respected figure throughout his career, Busby was awarded the CBE in 1958 and made the 66th Freeman of Manchester in 1967. In 1968, he was named Manager of the Year and was knighted following United’s European Cup triumph. In 1972 he was made a Knight Commander of St. Gregory by the Pope.

It is often said the mark of a man can be measured by the attendance at his funeral. Busby died in 1994, and thousands of fans lined the route of the cortege. Thousands more sent tributes from around the world, honouring a man who epitomised Manchester United and courage.

But the biggest tribute comes from a current United star, another graduate of Manchester’s phenomenal Youth system. Ryan Giggs, one of United’s heroes over the past 20 seasons, highlights the importance of understanding the legacy and influence of Sir Matt Busby:

“I think it’s very important, to know how the Busby Babes played and how successful they were before the air disaster and to know how Sir Matt built another great team. There are so many things that are relevant to us today and we need to carry on their legacy. For example, fans want to see young players coming through and doing well which they do on a regular basis at this club. And both as individuals and as a team, we have to play in the right manner, to excite supporters and get people off their seats. That has got to go on because it’s one of the things that sets this club apart.”

Fittingly, on the day Sir Matt would have turned 90, Manchester United again lifted the European Cup with a never-say-die come-from-behind win over Bayern Munich, to wrap up a unique Treble. The legacy of Busby continues to inspire the Club, the city and fans around the world. That is the mark of a true leader.