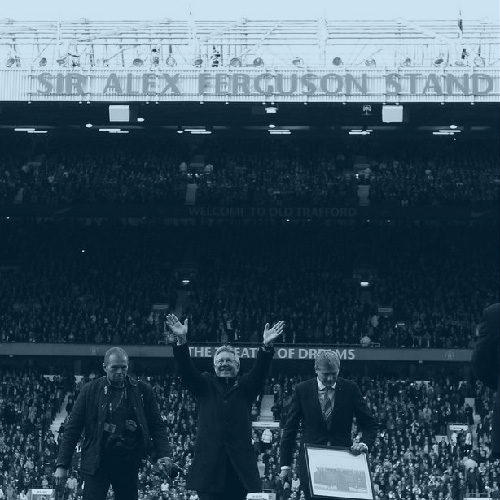 Posted at 05:57h in Articles by JurgenO 0 Comments
0 Likes
Share

In the previous column we considered Ferguson’s ethos (character) as the foundation for his success. But as Aristotle noted, persuasion – influence – is built on three components, and in this column we consider the second: pathos, i.e. Ferguson’s ability to put people “into a certain frame of mind”.

One criticism that could never be levelled at Sir Alex Ferguson is that he lacks passion. On more than one occasion his fiery outbursts have landed him in hot water with football authorities and many an errant player and journalist has suffered the wrath of his temper and unrelenting demand for loyalty, effort and commitment. Ferguson’s mind games and psychological tricks have distracted and confounded opposition managers for decades, and his public stoushes with rivals have become legendary.

Yet through it all he has been able to unite struggling teams and lift them to unprecedented levels of achievement by building up the self-belief, confidence and team spirit of the people in his care. And he has done it repeatedly because he understands how to get the best out of them.

The Passion of ‘Furious Fergie’

From the outset of his managerial career with East Stirlingshire and then St Mirren in 1974, Ferguson became known as a strict disciplinarian, but one who delivered results. By the time joined Aberdeen in 1978 had garnered the nickname ‘Furious Fergie’, and his reputation grew even more when it became known he had kicked a tea urn at his players during a particular half-time dressing down, leaving them shocked – and dripping with tea.

Over the years numerous former players have spoken of Ferguson’s ‘hairdryer treatment’, a torrent of ‘in-your-face’ criticism (along with the occasional boot or tea cup) dished out by the fiery Scotsman at any player failing to show the level of commitment he demanded.

Ferguson maintains there is nothing wrong with losing his temper if it’s for the right reason and his done in the right way. He believes in getting issues on the table, dealing with them, and then moving on without holding grudges. While his temper might create an element of fear in the dressing room, and certainly contributed to the departure of some noted players like Andre Kanchelskis, it has not detracted from the high regard in which most Manchester United players have held their manager over the years.

And that’s largely because Ferguson’s temper is only one aspect of his managerial toolbox. Verbal lashings directed at his players happen mostly behind closed doors, but in public he is frequently accused by the media of having a myopic loyalty towards his players and of fostering a siege mentality within his team. He stands up for them and defends their actions, as a good leader does, and then deals privately with any transgressions. And for the most part, Ferguson’s players through the years have recognised, respected and reciprocated his loyalty, and have responded to his half time team talks with a “never say die” attitude that has brought phenomenal success over the years.

Throughout his managerial career Ferguson has worked hard to draw out the natural abilities of his players and to put them in “the right frame of mind” (i.e. a winning mentality) using whatever motivational and psychological techniques he could.

One of the earliest of these tactics was creating a “siege mentality” at Aberdeen, a provincial club that had a single league title to its credit. By uniting his players against a common “enemy” (the Scottish media whom he claimed were biased in favour of the two Glaswegian giants, Celtic and Rangers), Ferguson created a powerful motivational force that changed the atmosphere at the club, and delivered numerous domestic and international trophies in the eight years he managed them.

It is a mindset he is often accused of having instilled at Manchester United as well. And while Ferguson is very adept at playing mind games with his opposition to put them in the wrong frame of mind, building successful teams requires much more than a siege mentality. It requires realism, trust and discipline.

Important as it is to develop self-belief and confidence, Ferguson also believes it is essential to stay realistic. He ruefully recalls his half-time team talk in Scotland’s must-win 1986 World Cup match against a very physical Uruguay, as particularly poor and uninspiring speech.

For a start, he had a blazing row with one of the players on the way into the dressing room, but rather than taking a moment to gather his thoughts and compose himself, he marched in and launched into what he later described as an “emptily Churchillian” exhortation that if they played to their form they could beat anybody in the competition.

Reflecting on this incident, he believes his attempt to inspire them with “the kind of rhetoric that is meant to convince moderate players they can transcend their limitations” instead robbed the team of the very specific feedback he should have given individual players to help them deal with what was happening on the field.

“A team-talk should always contain a healthy dose of realism, should encourage your men to recognise their strengths and work to exploit them,” he said afterwards. Scotland failed to achieve the win it needed and was eliminated. But for Ferguson it was a lesson he would not forget as he launched his Manchester United career a few months later.

Build Team Spirit Across the Organisation

In his autobiography, Managing My Life, Ferguson talks of the importance of building a spirit of trust and loyalty within his players.

“When critics of our game parade their theories about the attributes that lift certain teams above others, I am always amused by their eagerness to concentrate almost exclusively on technical and tactical comparisons. Frequently they discuss football in abstract terms, overlooking the reality that it is played by creatures of flesh and blood and feeling. Tactics are important but they don’t win football matches. Men win football matches. The best teams stand out because they are teams, because the individual members have been so integrated that the team functions with a single spirit. There is a constant flow of mutual support among the players, enabling them to feed off strengths and compensate for weaknesses. They depend on one another, trust one another. A manager should engender that sense of unity. He should create a bond among his players and between him and them that raises performance to heights that were unimaginable when they started out as disparate individuals.”

Creating this sense of team is not something that simply happens. When Ferguson arrived at Old Trafford in November 1986 he found a once proud Club languishing second from bottom in the English league, beset by a drinking culture, low levels of fitness, and the last league title a dim memory from the long-gone Busby era 19 years before. He realised he had ahead of him a lengthy process of rebuilding self-belief, not only on the field but also off it.

“I wanted to form a personal link with everybody around the place – not just the players, the coaches and the backroom staff but the office workers, the cooks and servers in the canteen and the laundry ladies. All had to believe that they were part of the club and that a resurgence was coming.”

He recognised that success would require a radical change in culture, and to do so he needed time, discipline and the support of his board.

Self-belief and success is rooted in a strong emphasis on discipline and self-control. Whether at East Stirlingshire, St Mirren, Aberdeen or Manchester United, Ferguson’s first task has always been to ensure people understand their roles and boundaries. As a player he recognised the need to make sacrifices to his lifestyle if he wished to be at the top of his game.

As a manager he has been adamant that no one individual is greater than the club he represents. Players who did not respect the boundaries or his instructions would be disciplined or even sold. “It doesn’t matter how high the player’s profile is,” he wrote in response to dropping superstar David Beckham for a crucial match against title rivals Leeds United. “If he is in the wrong, he is disciplined … rules and principles don’t mean much if they are bent the moment there is a practical disadvantage in applying them.”

As a player, Ferguson had become very disillusioned with managers’ apparent vagueness or indecision when confronting difficult choices. Consequently, he trained himself to make a rapid analysis and decision before speaking so that he came across as confident, calm and in control. And if he was unsure of the decision, he would continue encouraging dialogue until he had worked out a sound reply.

“There is nothing wrong with requiring time to consider a question or an argument,” he says, “and you can gain it without appearing to be a dithering idiot. I might say, ‘I’ve never considered that angle – can I give it some thought?’ By praising the other person’s ability to make me think, I increased his willingness to wait for an answer.”

Treat Them as Individuals

The more Ferguson has matured as a manager, the more he recognises the importance of getting to know people as individuals. One of the highest priorities of a manager, he believes, is to get to know the people. “It is only when you focus on one or two players at a time that you get a real insight into them,” he said, noting that people respond differently to pressure, discipline and encouragement. Getting the best from players as diverse as the direct Robson, Bruce or Schmeichel, the enigmatic artistry of Cantona or Giggs and the quiet persistence of Scholes and Skolsjaer requires understanding their unique personalities and dealing with each one as an individual.

It is also about making them feel important. From his early days as a semi-professional player, Ferguson understood the power and impact of how we make people feel. He recalls his first trainer at the Queens Park Youth Team as being a man who always made young players feel special. “Remembering how much that meant to me then, I have tried hard to convey warmth and reassurance to youngsters I have dealt with as a manager,” he reflected in his autobiography. “I have no desire to run their private lives,” he added, “but I am keen to educate them about the dangers they encounter as their careers progress.”

Over the years Ferguson has taken countless professional players through the ranks of the clubs he has served. Many have seen him as a father figure because of his interest in their wellbeing, both on the field and off it. Numerous players have moved on into successful managerial and coaching careers within Manchester United and elsewhere, strengthened by the self-belief Ferguson instilled in them and the way he made them feel.

Of course, no discussion of Ferguson’s use of motivational psychology would be complete without reference to his amazing ability to unbalance the opposition through his use of mind games, and his ability to garner the support of his board of directors, which we will consider in the next edition.