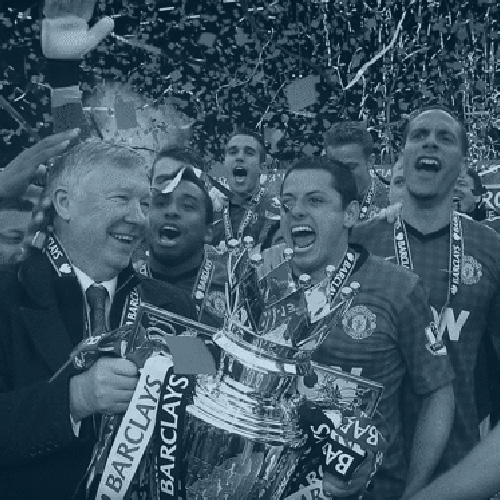 Posted at 22:23h in Articles by JurgenO 2 Comments
0 Likes
Share

“Don’t call me Boss,” Sir Alex Ferguson told his stunned players when he announced his retirement on 8 May 2013. “After I’ve gone and we bump into each other, I don’t want to hear you call me Boss ever again. Call me anything but that. Call me whatever you’ve called me behind my back for years — but just not Boss. You’ll have a new boss by then and he’s the only one you should call that.”

A simple message, yet one which characterises his leadership philosophy and, he hopes, the legacy he leaves behind: no single person is greater than the club.

“The decision has been taken. I’m going to leave the club.” In May 2001 Ferguson warned the football world that he would be retiring from Manchester United and football at the end of the 2001-02 season.

The club had just won a third consecutive league title and a seventh in nine years, but his announcement brought with it a miserable campaign. The club finished without a trophy for the first time in four years, and outside the top two for the first time in a decade. By February 2002 he had withdrawn his retirement plans, and signed on for at least another three years. He subsequently admitted that the pre-announcement of his retirement had resulted in a negative effect on the players and on his ability to impose discipline.

Consequently, his second retirement was handled very differently. Although he had made the decision in December, following the death of his wife’s sister, he kept it quiet, allowing his players to focus on their pursuit of another treble.

They fell short with crushing quarter-final defeats in both FA Cup and Champions League, leaving Ferguson uncharacteristically distraught and unable to face the post-match press conference. The real reason for his anguish only emerged after United had convincingly clinched a 20th league title: days later he announced his retirement, leaving fans with only two matches to absorb the news and say their farewells.

The question of his eventual retirement had been an ever-present issue since 2002. While on tour in Houston, Texas, in July 2010 Ferguson insisted he wanted to leave his successor a vibrant, thriving young set of players, imbued with the realistic self-belief and confidence to continue winning well beyond his own tenure at the helm. He did not want a repeat of the situation he inherited in 1986 when he had to completely rebuild an ageing, fragmented squad. He was also mindful of the impact of Sir Matt Busby’s departure in 1970, which saw United slump into the English Second Division for a season.

“What you have to do is maintain the success of the club and make sure that, no matter when I quit, the club is always in good hands,” he said. “I also have the opportunity of working with very good footballers, with good desire and a good purpose about themselves. We don’t build a footballer just in terms of ability, we try to build their character to make them better human beings and to understand their responsibilities,” he added.

Youth, renewal and sustainability have been hallmarks of Ferguson’s 39-year, 2,155 match career as a manager, first at East Stirlingshire, followed by St Mirren, Aberdeen, Scotland and finally Manchester United.

“You Can’t Win Anything in Football with Kids”

From the start of his managerial career, Ferguson has placed emphasis on developing young talent. As already outlined in Part 1 of this series, Ferguson rejuvenated the underachieving St Mirren and Aberdeen clubs in Scotland before joining United in 1986.

Before he achieved United’s first league championship in 26 years, the youth team reached the FA Youth Cup final in successive seasons, evoking memories of the famed ‘Busby Babes’ four decades earlier. Those wins heralded the ‘Class of 92’, a group of highly talented youngsters like Paul Scholes, Gary Neville, David Beckham and Nicky Butt, who would go on to become household names and a core part of team over the next decade and more.

However, Ferguson’s strong commitment to a youth policy was often questioned, notably at the start of the 1995-96 season. Following the league success of 1992-93 and the double in 1993-94, United’s trophy cabinet was bare in 1994-95 and Ferguson realised he would need to rebuild the squad. Established players like Paul Ince, Mark Hughes and Andrei Kanchelskis were sold, but rather than investing in the transfer market Ferguson turned to the Youth Academy, promoting several players to the first team squad.

They lost the opening match of the season, prompting football theorist and former Liverpool legend Alan Hansen to heap scorn on Ferguson’s management approach. “You can’t win anything in football with kids,” he famously proclaimed. By December 1995 Hansen’s warning seemed to have merit: the Red Devils trailed leaders Newcastle United by 10 points.

As was the case in early 1990, when success in the FA Cup saved his career, Ferguson did not panic, but inspired his team to stay focused on the goal. Two crucial wins over the leaders contributed to United winning the Cup and League double that season, and witnessed the birth of three new threats:

Finding (Young) Talent Around the Globe

Ferguson realised early on that the changing nature of the global game means it is unlikely that future winning squads will come from the same geographic region. He invested significantly in adapting the club’s youth policy and international scouting teams to identify potential talent at all levels of the game.

Reflecting on the generation of youngsters breaking into the United first team since 2010 Ferguson acknowledges that not many are home-grown. “The boys we have at the moment, we bought them but our judgment has been good in terms of scouting them. And we have used different departments to do the scouting. The academy scouting department got us the Da Silvas [Rafael and Fábio]. Our mid-academy, youth scouting got us Javier Hernández. They alerted us to Hernández and then we followed up with our senior scout – Jim Lawlor – who went to Mexico for three weeks before we made the call on him. With the full-time scouting department, the first-team scouting, bringing in Anderson and Nani was done at that level.”

Across the decades, Ferguson has continued to reinvent his team, making many astute investments to bring both experienced and promising players to United, often at bargain prices. Only occasionally did he bring in expensive players at the peak or tail-end of their careers, and then only to plug specific gaps in his squad.

Not all the acquisitions were successful and several players were quickly sold again.

But the balance sheet finished strongly on Ferguson’s side, largely due to his ability to identify emerging talent. Buying young unproven players is a risk, but Ferguson was always adamant: “We invest in the future!”

Bobby Charlton, a club director and legendary player under Busby, agreed. “Youngsters want to come here because they know that the manager’s philosophy is that if they are good enough then they will get a game irrespective of age,” he said.

So it should be no surprise the 2012-13 title-winning squad is the third youngest in the English Premier League. It included six players that came through United’s youth ranks, including the ever-green Ryan Giggs (39) and Paul Scholes (38, now retired).

And days after clinching the top prize in England, one of the Manchester United junior teams clinched the U21 premiership in typical United fashion – coming back from a 2-0 deficit to win the final by 3-2.

Ferguson is handing his successor a strong core of players with the potential to continue challenging for trophies well into the future.

“No One is Bigger than the Club”

Another recurring theme in Ferguson’s management has been his view that no player is bigger than the club. His ‘my way or the highway’ approach to dealing with players and the pressure of this management tactic caused the departure of many notable players, Gordon Strachan, Paul McGrath, Paul Ince, Jaap Stam, Dwight Yorke, David Beckham, Ruud van Nistelrooy, Roy Keane and Gabriel Heinze.

That philosophy was also evident in the choice of Ferguson’s successor, in which Sir Alex is believed to have played a major role.

While the footballing world was still trying to get to grips with the news of his retirement, his own focus had already moved on. Even when winning titles, he was constantly looking forward to the next match, another season and another challenge. This time it was the challenge of replacing himself!

The 2013 off-season has already witnessed a number of high profile managers changing clubs. The likes of Barcelona’s Pep Guardiola (to Bayern Munich) and Real Madrid’s José ‘The Special One’ Mourinho (back to Chelsea) were considered, along with other big names and several of Ferguson’s former players who had since gone into management themselves.

But just as Ferguson believed no player to be bigger than the club, he also did not want a manager who would consider himself as such. Sir Alex wanted someone who shared his values of passion and loyalty, and convinced United’s Board to approach David Moyes, a somewhat dour, disciplinarian Scot who had taken over a relegation-threatened Everton in 2002 and succeeded in maintaining their proud record of having England’s longest run in top flight football.

Moyes had built up a strong core of players, who perhaps overachieved slightly within the constraints of Everton’s financial structures. But the stability he achieved was counter-balanced by a lack of genuine success, with a poor away record against top teams, a mediocre record in European competition and no silverware in any of the 11 season he was in charge.

“The club will now witness the dawn of a new era and sustaining success at Old Trafford will be a really hard job for David Moyes,” warns former Liverpool defender and football pundit Alan Hansen (yes, the same man who believed Ferguson could win nothing with kids).

Like Ferguson, United fans hope he will be proved wrong again.

Addressing the Old Trafford faithful on the occasion of his last home match, only four days after announcing his retirement, Sir Alex exhorted the capacity crowd to stand by Moyes: “I’d also like to remind you that when we had bad times here, the club stood by me, all my staff stood by me, the players stood by me. Your job now is to stand by our new manager. That is important.”

Senior players including Golden Boot winner Robin van Persie and Michael Carrick have echoed Ferguson’s sentiments and are looking forward to new challenges. And at the final match of the season, a typically thrilling 5-5 draw away to West Bromwich Albion – a perfect bookend to the 3-3 draw between St Mirren and Forfar that marked the real start of his managerial career in 1974 – the travelling supporters expressed their sentiments when they sang: “Come on David Moyes, play like Fergie’s boys”.

Quite fitting that only days after Sir Alex Ferguson’s last match with the senior team, the next generation of players clinched the U21 title in typical United come-from-behind style. That’s the spirit Ferguson brought to Manchester United in 1986.

It is the legacy he hopes to leave behind.

This is the final part of a 4-part series on the leadership of one of the most influential sport managers of all time.The first article considered Sir Alex Ferguson’s character, and specifically his sense of loyalty, as the foundation on which his success is built (the “ethos” or character component of influence). The second focused on his ability to motivate and inspire his players and staff (the “pathos”), while the third addressed the “logos” – the words and reasoning of the man, and the outcomes he has achieved.