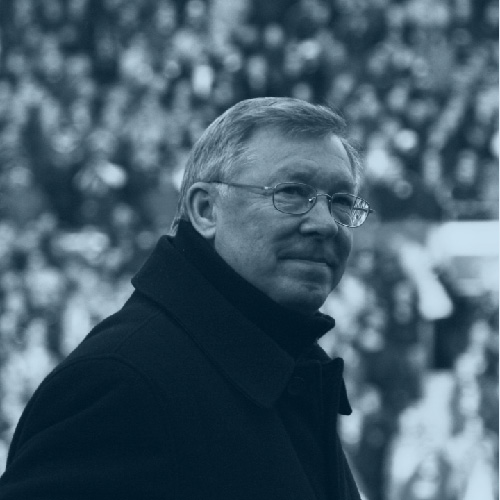 On 6 November 2011 Manchester United FC rebadged the northern stand of Old Trafford to be the Sir Alex Ferguson Stand. It is yet another sign of the influence the Glaswegian has wielded in his 25 years at the club.

The first article of this series considered Ferguson’s character, and specifically his sense of loyalty, as the foundation on which his success is built. The second focused on his ability to motivate and inspire his players and staff. This article address the “logos” – the words and reasoning of the man, and the outcomes he has achieved.

Ferguson arrived in Manchester in 1986 with the simple intention to “… knock Liverpool off its … perch.” It was perhaps a metaphoric target, an aspirational rather than literal goal: Liverpool was the dominant club in English and European football, and their record 16 league titles stood in stark contrast to the seven Manchester United had won (the last of which was 19 years previously). The club was United in name only; it had lost its self-belief and confidence, and Ferguson’s goal was to restore United’s pride and winning ways.

Under his guidance Manchester United has become a global sporting brand, and the benchmark against which the English game is measured. His United teams have won as many trophies (36) as the highly esteemed Bob Paisley (18), Bill Shankly (8) and Brian Clough (10) combined won over the course of their entire managerial careers.

Despite being written off time and again, Manchester United have dominated English football for the past decade and a half, and it is fitting that in May 2011, Ferguson’s 25th season in charge, his team finally did knock Liverpool off the perch as holder of the most English league titles.

As noted in the first article of this series, Ferguson’s story could have been so different had United’s Board succumbed to the pressure of both fans and media in 1989. United was struggling in mid-table, while Liverpool was well on track for an 18th league title. Following yet another home defeat that December (1-2 against Crystal Palace), long-time supporter Pete Molyneux unfurled the now-infamous banner demanding Ferguson’s resignation: “3 YEARS OF EXCUSES AND IT’S STILL CRAP… TA RA FERGIE.”

Ferguson later admitted the spontaneous applause and brutal cheering with which the 33,514 spectators greeted the banner made it the darkest day of his Manchester career.

Sitting in his customary seat to watch Manchester United honour Ferguson’s 25 years, Pete Molyneux (57) grinned ruefully: “I’m just glad he stuck around because what he has delivered since then is more than we could ever have dreamed of. He’s taken us from that nadir to a point where I now think he should be canonised.”

Hurtful as the day had been, Ferguson was not prepared to throw in the towel. He was adamant that he had a job to do, and emphatically reminded the Board that his considerable successes at both St Mirren and Aberdeen had been preceded by years of rebuilding efforts. Great buildings require solid foundations, which are unseen and take time to lay. What fans saw was the building chaos, the run of poor results and the decision to sell favourites like Paul McGrath and Norman Whiteside in the summer of 1989. What they did not see were the changes in morale and discipline within the squad, the new training and eating regime, and the launch of a new youth policy, all of which would bear such fruit in years to come.

Ferguson’s reasoning bought him at least another month of grace. And then the successful run in the 1989-90 FA Cup set their doubts aside; victory provided the Board and fans with the evidence they needed that the club was on the right track.

Dealing with the Board

It was not the only time Ferguson had to fight the Board and club owners, the media and even fans over unpopular decisions, policy, players and finances. The sale of Paul Ince, David Beckham and others, the occasional season without a trophy, and his growing interest in racehorses have contributed to stoushes, particularly in the years since the Glazer family took ownership of the club.

Not all his judgment calls have paid off, both on the field and off it. Ferguson himself admits to many of these, and learns from his failures, rectifies what he can, and moves on without wallowing in self-pity. His burning desire to keep winning, his forceful personality and a confidence born of years of success, equip him to deal with the Board and any opposition.

Reflecting on his style, Ferguson looks to his mentor, Jock Stein: “His system of dealing with the Celtic board, of putting rhetorical questions, using terms that left the others with hardly any choice but endorsing his suggestions, was classic Stein. I do that myself. I think your personality has got to force things because sometimes you cannot wait for decisions. I don’t generally ask for anything at a board meeting. Maybe I go to the chairman. For instance, anything for the youth programme usually gets passed without fuss because they know how much it means to me and they have seen the benefits.”

But Ferguson also knows that sentiment counts for little in the world of commercial football. Failing to deliver results has consequences. And he makes that equally clear to his players.

“Decision-making is not done for me, and not done for you,” he repeatedly tells his players. “It’s done for the club. I will do everything I can for the players off the field, but when it comes to selecting the team I have always had a ruthless streak. The team always comes first.”

That was clearly illustrated in his decision to sell Paul Ince in 1995 despite intense opposition from the Board. He cited the player’s attitude and performance over the preceding five months. “This was not a spur of the moment decision. It weighed heavily on my mind but I needed to be in control of my team. … if footballers think they are above the manager’s control there is only one word to be said to them – goodbye.”

Harsh words perhaps, but that’s Ferguson’s style. “Alex understands psychology and he knows how to assert himself,” says Craig Brown, manager of 70 Scotland internationals. “There’s no side to him. He’s never two-faced. He’s right out with what he thinks”.

From the Horse’s Mouth

Ferguson’s direct speaking frequently caused problems with the Board, media and football officials. One of the issues that drew plenty of media criticism was Ferguson’s decision to invest in racehorses. The Board became concerned that his interest would divert his focus from the job at hand, and this lead to several public stoushes and even a court case.

Yet Ferguson is adamant that his deep interest in something outside of football was a vital part of being able to maintain his drive in football.

“For twenty-two years I was utterly obsessed with the game and if I had continued to be as blinkered, my efficiency would definitely have been eroded,” he wrote in his autobiography. “When you are in a job that makes severe daily demands on your nervous energy, you have to find a way of surviving the strains.” Racing provides that outlet for him, and he urges managers in any field to find some external respite from the pressures of the job.

“I think it is now essential in management to cut yourself off from the hectic activity around you and create a quiet time for thinking, a period of isolation in which you can examine objectively all the facts that have to be considered and the decisions that have to be taken.”

This is the common sense which has underpinned Ferguson’s many years at the top of his game.

When media tycoon Rupert Murdoch was once asked how he would have run Manchester United had BskyB’s proposed 1998 takeover of the Club succeeded, he replied: “You would have left Alex Ferguson there and prayed he lived forever.”

The reality is, no one lives forever, and the hallmark of a truly great leader is the legacy he or she leaves behind. This legacy will be the focus of the final article in this series.