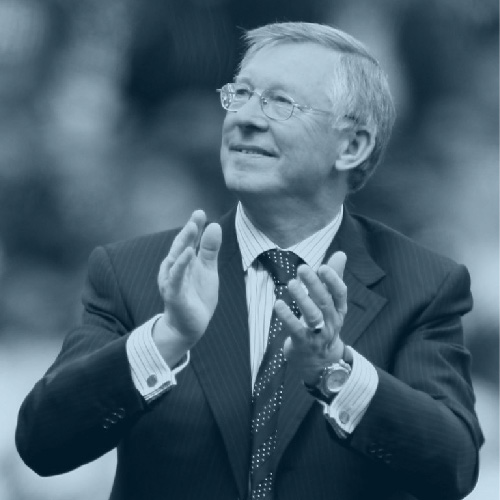 05 Jun Britain’s Most Successful Manager has “No Managerial Ability”

Posted at 05:51h in Articles by JurgenO 4 Comments
0 Likes
Share

“No managerial ability” – that was the reason Willie Todd, Chairman of St Mirren Football Club, provided to an industrial tribunal after he fired the club’s 36-year old manager in 1978. The man in question was Alexander Chapman Ferguson, now better known as Sir Alex, or simply Fergie, the man widely acknowledged as the most successful manager in British (if not world) footballing history.

A Track Record of Success

And his managerial achievements are impressive. Only months before Todd’s indictment, Ferguson had delivered him the Scottish First Division title and promotion to the Premier Division, a feat made all the more remarkable when considering the average age of that team was only 19!

When Ferguson first took control of the side in 1974, they were languishing in the lower half of the Scottish Second Division and struggled to attract 1,000 supporters to matches, but he instilled self-belief, an attacking style of play and a winning mentality in the young squad. He also uncovered a number of talented players who would go on to glory in Scotland’s national side.

He also took on a coaching role with the Scottish national side, specifically to work under and learn from the man he considered to be the master manager, one Jock Stein. When Stein suffered a fatal heart attack in a crucial European qualification match for a place at the 1986 World Cup, Ferguson took over as caretaker manager until the end of the tournament in Mexico.

By the time Ferguson joined Manchester United on 6 November 1986 he already had a track record of managerial success, and that is exactly what the United Board was looking for.

The post-Busby years (see the article in the March 2011 edition) had been very lean – only three years after Sir Matt retired, United were relegated to the Second Division. Although they returned to the top flight immediately, they had added only three FA Cups and two Charity Shields to their trophy cabinet in the intervening fifteen years. Four managers had tried recreating the glory years without success.

But over the past quarter century Ferguson has turned United into one of the most successful sporting teams in the world. At the time of writing fans are celebrating a record 19th English league championship (the 11th under Sir Alex) and are preparing for their fourth Champions League Final in the past five years. The team and the man have won virtually every title on offer.

There is simply no equivalent to Ferguson. In an era where the demand on sport managers to deliver immediate results is even higher than the expectations placed on corporate CEOs, Ferguson has continued to defy the critics and inspire new generations of players and managers.

Ferguson’s years at Manchester United have also witnessed a radical transformation in the nature of professional football, the increasing commercialisation of clubs, and the diminishing power of managers. However, his fiery nature, his track record and his longevity of service have made him an influential figure at Old Trafford and the global football scene.

He has built three completely separate winning teams – the first Championship side of 1991-93, the “Fergie Fledglings” youth team of Giggs, Beckham, the Neville brothers, Scholes and Butt that dominated in the late 1990s, and the more recent side built around Rooney and Ronaldo. In between he has continued winning trophies, tinkering with the makeup of the squad and the staff, and developing new talent (players as well as managers).

Outspoken, demanding and abrasive, brash and uncompromising – these are all terms that can be used to describe Ferguson, but nobody can deny his phenomenal success in 37 years of management is testament to an uncanny tactical acumen and an ability to manage, motivate, influence and inspire those around him. Whether he’s dealing with the demanding corporate executives of a global business empire, the egos of multimillionaire superstars, or the starry-eyed juniors entering the Manchester United Youth Academy with dreams of becoming the next famous recipient of a “Red Devil” jersey, Ferguson understands how to bring out the best in them.

“No matter what kind of journey we make of life, where we started out will always be part of us.” This is how Ferguson opens his autobiography, Managing My Life, written after the amazing success he and his team achieved in 1999.

Our roots define our values and shape our character, and Ferguson attributes his success in handling people and fostering a culture of loyalty and commitment to the early years of his life, where he learned the value of community, hard work and perseverance in the face of opposition.

He was born into a working class family in Govan, the ship-building district of Glasgow, on 31 December 1941, and worked as an apprentice tool-worker while trying to break into professional football. He became an active trade union shop steward and remains an ardent and outspoken Labour Party supporter and one of its largest individual financial donors to this day.

As a player, Ferguson had a chequered career, scoring 170 goals in 317 first class appearances (including joint top scorer in 1965-66, and 10 goals in 7 matches during a Scotland XI tour of Oceania in 1967) and becoming the most expensive Scottish inter-club transfer signing when he moved from Dunfermline to Rangers in 1966. But for all his prowess as a striker, he never broke into the full Scottish national team, and failed to establish himself as a consistent presence in any of the six Clubs he represented over a period of 17 years.

At the relatively tender age of 32 Ferguson quit playing and became part time manager of East Stirlingshire (June 1974), where he quickly gained a reputation as a strict disciplinarian – but also as someone who obtained results. Only five months later he was offered a fulltime position as manager of the struggling Second Division St Mirren.

Ferguson confesses that the decision to leave part time employment for a fulltime position was surprisingly difficult because of his sense of loyalty to the club that had given him a start in manager. This is one of the underlying values that has governed Ferguson’s managerial career, and has contributed to some of the major player-related controversies that received wide media coverage over the years. The decision to release players like Paul Ince, Jaap Stam and Cristiano Ronaldo were not easy to make, and brought him heavy criticism. But in each case he believed the players’ disloyalty to the Club were a distraction that could not be tolerated.

Given his remarkable record of success, it’s easy to overlook the harsh reality of managing a football team. It took Ferguson three years to mould St Mirren into a championship winning side. At Aberdeen he also needed three years to instil his vision, discipline and a winning culture before the perennial underachievers won the first of their three Championships under his guidance.

And it’s easy to forget that Ferguson was rumoured to be one match away from being fired by Manchester United in 1989. Although he had taken a team languishing in the 21st position (out of 22 in the league) to finish as league runners up in his first season, subsequent seasons were less successful.

After three years in the job he had failed to win a trophy and by late 1989 United were barely above the relegation zone. Many journalists and supporters openly called for Ferguson’s dismissal, and there was a widespread belief that a defeat in that season’s FA Cup third round match against a resurgent Nottingham Forest would have seen the axe fall.

As it happened, United won that match 1-0 and went on to win the FA Cup and the following season’s European Cup Winners Cup and Super Cup.

Ferguson is adamant that irrespective of the result against Forest, the United Board was committed to the long term vision he had outlined, and they supported the extensive work he was doing behind the scenes to reorganise the Club’s coaching structure, scouting policy and the significant investment Ferguson was making in the Youth Academy.

Even despite all the success Ferguson has achieved, he continues to face criticism over his managerial style, his decision not to announce a retirement date, team selection choices, and decisions around buying and selling of big name players. He recognises that the media and public are fickle and demand results.

“The job of a football manager is a pretty fragile one,” he told CNN in a 2009 interview. “You can be on the very top of the world and then after two defeats you are the worst team ever.”

These days in particular he warns that a new generation of younger owners and executives are increasingly impatient to see returns on their huge investments. Because many new owners are from other countries they also have fewer ties to the local community (and in some cases not even to the sport; they see their acquisition as nothing more than a business deal).

However, Ferguson believes mangers need time to improve clubs by laying a solid foundation on which to build lasting success. He was given the time, and he delivered results.

His tactical acumen, his knowledge and his tenacity are keys to his success, which is built on a commitment to youth, a shrewd investment in talent, and a determination to win. But perhaps above all, it is his ability to get into the minds of his players and opposition, to both inspire and confound them.

In the next edition we will consider Ferguson’s use of Aristotle’s second element, pathos – the ability to put people in “the right frame of mind”.